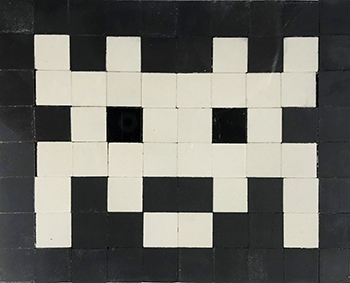 The French street artist Invader presents on the online art gallery SAO his”Invasion Kit 03 – Hollywoodee”, made in 2004 in 150 copies, in line with the Space Invaders

Special feature of this unique piece:

Franck Slama, aka Invader, was born in France in 1969. His artistic project “Space Invaders” began in 1996: it consisted first of invading the streets of Paris and then those of the world. As Invader explains: “Each of these pieces is a fragment of a sprawling work.”

Dividing his works into tile tiles around the globe, Invader operates what he calls “invasion waves“. Each of his pieces is referenced and the artist has even developed a smartphone app to scan his Space Invaders,which generates a score – and an interplanetary game.

Invader is today an essential artist in the history of street art andcontemporary art. It is exhibited in collections, galleries and museums around the world.