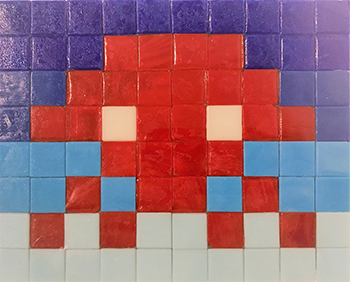 Plexiglas tile mosaic, delivered with the original packaging of the invasion kit

Special features of this work:

Invader, whose real name is Franck Slama, was born in 1969 in France. In 1996, he set up his artistic project “Space Invaders“, consisting first of invading the streets of Paris and then those of the world. Invader explains: “Each of these pieces is a fragment of a sprawling work.”

Distributing his tilemosaic works around the world, Invader operates what he calls “invasion waves“. Each of his pieces is referenced and the artist has even developed a smartphone app to scan his Space Invaders,which generates a score – and an interplanetary game.

Today, Invader is an essential artist in the history of street art andcontemporary art. It is exhibited in collections, galleries and museums around the world.