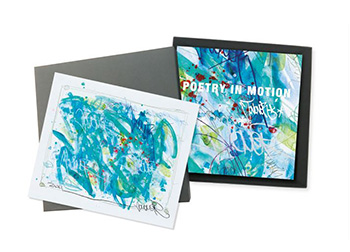 Street artist JonOne presents the”Poetry in Motion” box set on the online art gallery, consisting of a 300g silkscreen on Beaux-Arts paper. (22 x 26 cm), signed by the artist and numbered on 200 copies, and a book by the artist.

The lid of each box has been hand-customised by the artist.

A word about street art presented:

Our online art gallery offers this box set consisting of a silkscreen on Beaux-arts 300g paper. (22 x 26 cm) and a book by the artist.

Special features of this box:

A word about the artist Jonone:

Artist, graffiti artist and painter, John Andrew Perello, better known as JonOne, was born in New York in 1963. First tagging the streets of Harlem and the subways, he gradually opened up to the world and decided, in the late 1980s, to go to Paris, which he would crisscross in the company of the pioneers of Graffiti and French hip hop.

It is in Paris that JonOne will move fromurban art to canvas,developing a colorful street art universe where graffiti and letteringmingle. Its growing success led to a record sale to the auction house ARTCURIAL in 2007, and its international reputation continues to be confirmed.

JonOne exhibits and is collected today all over the world, and for several years he has multiplied prestigious partnerships: he repainted a Thalys in 2009, customised Eric Cantona’s Rolls Royce in 2012, sold for the benefit of the Abbé Pierre Foundation. And in 2015, he created the monumental fresco “Freedom, Equality, Fraternity” at theAssemblée Nationale in Paris.