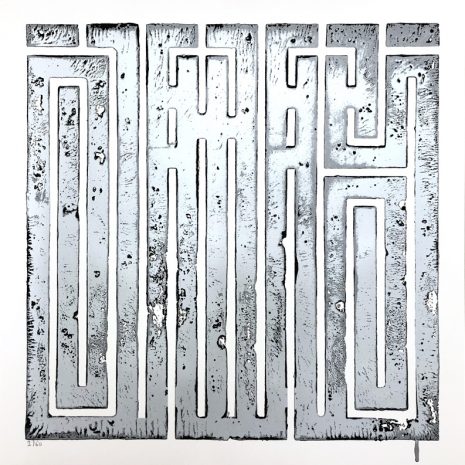 Streetart artist L’Atlas presents the silkscreen “Just an other seal (Silver)” on the online art gallery, a limited edition of 2020.

Street art silkscreen signed by L’Atlas and numbered on 60 copies.

Our online art gallery offers the work of this French artist of a size of 56 x 56 cm.

A word about the artist The Atlas:

L’Atlas, whose real name is Jules Dedet,is a French street art artist born in Toulouse in 1978.

He began graffiti in the streets in the 1990s.

Passionate about Chinese and Arabic calligraphy, for the aesthetics of the line, he went to study the subtleties of it with a master in Egypt. He then developed his own universal pictorial language.

Surfing on street art,flirting withoptical art andabstraction, L’Atlas marks the urban space of its geometric graffiti most often concealing a word (initially its name), a message of symbolic significance.

From the 2000s, L’Atlas will transfer itsurban art work to canvas and will be exhibited in many galleries of street art andcontemporary art.

L’Atlas will also lead prestigious partnerships, notably with Guerlain and agnès b.

L’Atlas is today an essential artist of the French street art scene.