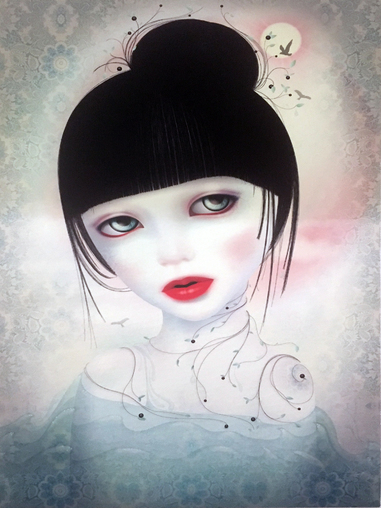 A word about artist Mijn Schatje:

Behind this mysterious pseudonym – which means something like “my little treasure” in Dutch – hides a young artist with a triple Franco-Hispanic-Dutch culture. At the crossroads of Mark’s dreamlike universes Ryden, Tim Burton, Lewis Carroll and Andersen, his magical compositions combine digital drawings and graphics of great delicacy.

Mijn Schatje quickly detached himself from his training as a graphic designer to evolve into a rather unique digital creation. His images were first displayed in the press and on the album covers of the Label Record Makers, as well as on many flyers of Parisian clubs, before being considered as works in their own right.

His strangers digital dolls with an inquisitive, sometimes melancholy look, have seduced the public and allowed Mijn Schatje to multiply partnerships with major brands, eager to collaborate with this singular contemporary artist.