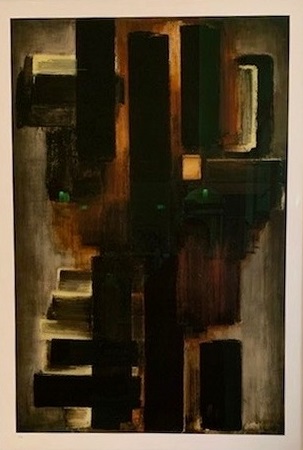 Contemporaryartist Pierre Soulages presents on the sao online art gallery a limited edition of 99 copies made from an original 1953 work.

Pigment inkjet edition on Canson Etching Museum 310g. paper, numbered in pencil from 1 to 99 and bearing the dry stamp”Pierre Soulages“of the Gandur Foundation for The Art of Geneva.

A word about the contemporary artwork presented:

Our online art gallery offers the work of this french contemporary artist with a dimension of 111 x 77 cm.

Features of this edition (from an original work made in 1953):

A word about the artist Pierre Soulages:

At the age of 18, he went to Paris to study at the École Nationale des Beaux-Arts.

After the Second World War, he devoted himself solely to his painting and went more and more to work his paintings with deep blacks.

Soulages will multiply exhibitions all over the world.

Today, his contemporary art’s artworks is among the most expensive and is included in the world’s most prestigious collections such as the MoMA in New York or the Tate Gallery in London.

A retrospective exhibition of the work of Pierre Soulages was organized at the Louvre in 2019 to mark the 100th anniversary of this great contemporary artist.