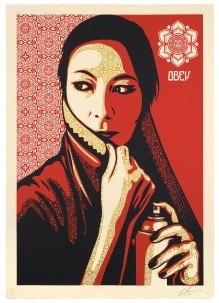 Artwork signed by the artist and numbered on 89 copies.

Our online art gallery offers this artwork of a size of 106 x 76 cm.

Features of this silkscreen:

A word about artist Shepard Fairey:

This American artist, whose success became global after the realization of campaign posters for Barack Obama in 2008, works as a silkscreen maker, fresquist and illustrator. The artist’s posters and slogans (such as”HOPE“),which tend to makeObama‘s image an icon, are repeated in many cities across the United States, including Chicago, before spreading around the world.

While studying design, he created in 1989 the campaign of stickers André the Giant Has a Posse, which will give the campaign Obey Giant.

Very committed, Shepard Fairey will create, with other artists, a series of posters “anti-war, anti-Bush” for the street art campaign entitled “Be the Revolution” of the collective Post Gen.

Shepard Fairey‘s urban art work is now present in many institutions such as the Smithsonian, MoMA in New York, the Victoria and Albert Museum in London and the Institute of Contemporary Art in Boston.

The artistic work of Shepard Fairey is influenced by the work ofAndy Warhol,Alexander Rodchenko or Diego Rivera.