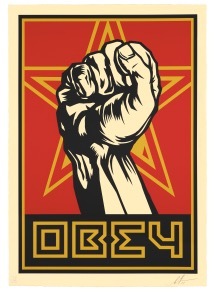 Street art silkscreen signed by theartist and numbered on 89 copies.

Our online art gallery offers this artwork of a size of 106 x 76 cm.

Features of this silkscreen:

A word about artist Shepard Fairey:

Shepard Fairey was born in 1970 in the United States, where he developed a work that lies betweencontemporary art and street art.

He first bedies, in the late 1980s, with his character Obey Giant, which he first developed in the form of stickers.

But it was really when he got involved in Barack Obama‘s 2008 campaign, supporting the future president with posters bearing his effigy bearing shocking slogans (like”HOPE“),that Shepard Fairey met with worldwide success.

His works are collected all over the world and appear in major institutions, such as the Victoria and Albert Museum in London or MoMA in New York.