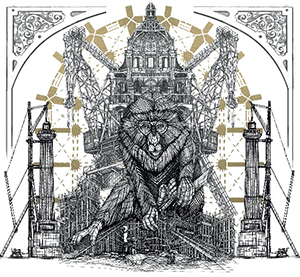 Silkscreen signed by Monkeybird and numbered on 100 copies, 25 x 25 cm.

A word about Monkeybird:

The street art duo Monkeybird was formed in 2012: it was then that Louis Boidron and Edouard Egéa began their work in street art with four hands, after studying at the BordeauxSchool of Design.

Their universe, where Blow,the bird, and Temor, the monkey, rub shoulders, speak of humanity and its hidden side. The two artists mix myths and legends with the help of elaborate graphic design.

Off the street, Monkeybird works a lot on wood, enjoying this “living” material and its evolution over time. The duo multiplies and adapts its techniques: stencil, engraving, linocut, drawing, cutting,no limit set against its creativity.

Monkeybird also draws inspiration from his travels, which also allow him to be represented today in many cities around the world.