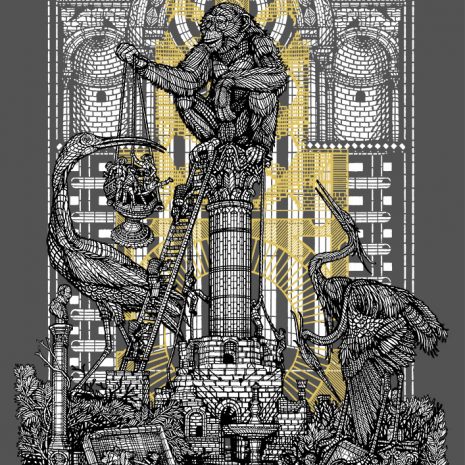 This limited edition is signed by Monkeybird and numbered on 50 copies.

Our online art gallery offers the work of these French artists of a dimension of 70 x 50 cm.

A word about the Monkeybird crew:

The duo Monkeybird was formed in 2012 by Louis Boidron and Edouard Egéa, former comrades at the Bordeaux School of Design.

Their universe, which speaks of men and their hidden face, makes Blow,the bird (Bird), and Temor,the monkey (Monkey) , intersect at infinity.monkey All in a graphic of great sophistication, mixing paint and stencil.

The crew street art Monkeybird works on multiple supports: the walls of the streets, of course, but also on canvas, on wood, on various papers, and also indulges in silkscreen.

Monkeybird,for its street art artworks,practices the art of stencil and cutting, engraving, drawing or printing on glass.

The sources of inspiration of the two artists are many: illumination, medieval stained glass, architectural ornamentation, imagery of the Arts and Crafts … And their imagination knows no bounds.

A major figure in urban art in France, the Monkeybird leave their mark on the streets of many cities in their country, but also in all of Europe.